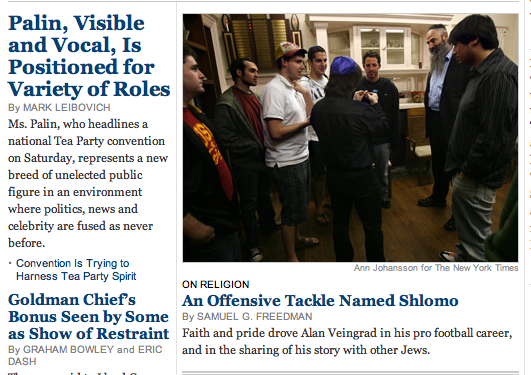 When I pulled up The New York Times tonight, I was certain the 2012 presidential campaign had started in earnest.

“Palin, Visible and Vocal,” the headline read, “Is Positioned for Variety of Roles.”

And there she was, back turned but no less visible, and in a role as varied as any I could imagine for her: in a yarmulke. Sarah Palin: Evangelical Christian, Jew, presidential hopeful. What else could it mean? Was she talking with Jews from Iowa?

Before I could even stop to think it didn’t make sense — The First Dude should be wearing the yarmulke — I realized it was only a question of poor layout. The caption-less photo belongs to Shlomo, the former NFL lineman now sharing his story of faith and pride.